After Bitcoin’s dip to $11,400, the crypto market saw red for many coins over the weekend. At press time, Bitcoin was staging a possible recovery upward priced at $11,760.

Large-cap altcoins also saw modest price gains and some indicated that their pullback was complete, and the previous uptrend might continue. Litecoin was holding on to support; Algorand and Tezos looked to have begun recovery by posting higher lows. 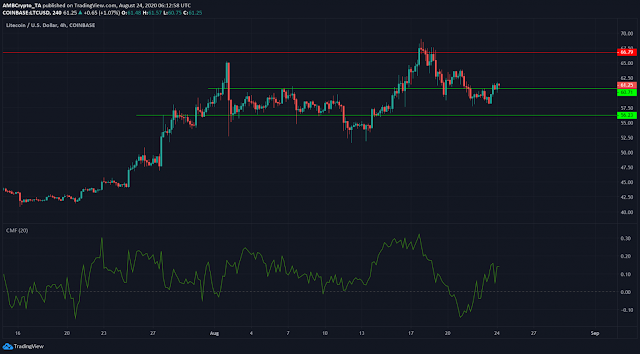 Litcoin reached a local high near $66 before facing rejection. It was trading just above support in the $60 zone.

Chaikin Money Flow had a positive value, meaning money flowed into the market and indicating buyer interest. It is possible Litecoin can consolidate above support before another move toward resistance. Loss of current support would push the price towards $56 and possibly even lower.

Ranked 7 with a market cap of $4 billion, Litecoin was in the news recently after Greyscale’s Litecoin trust went public. 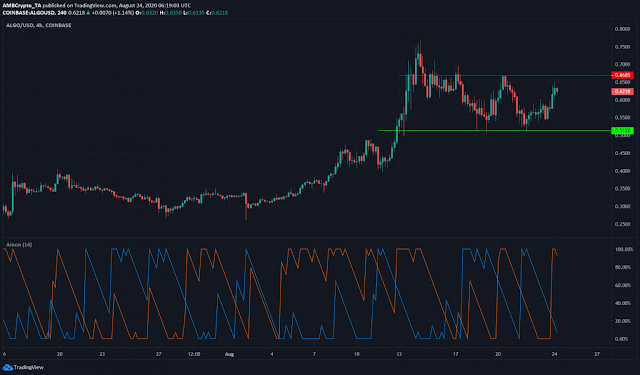 
Algorand faced stiff resistance at $0.66 and was forced to find support at $0.5 zone. It appeared to be gearing up for another crack at resistance in the short-term, as Aroon indicator showed bullish momentum beginning to take hold.

ALGO held rank 36, with a marketcap of $473 million. Its trading volume did not see any significant spike the past couple days. 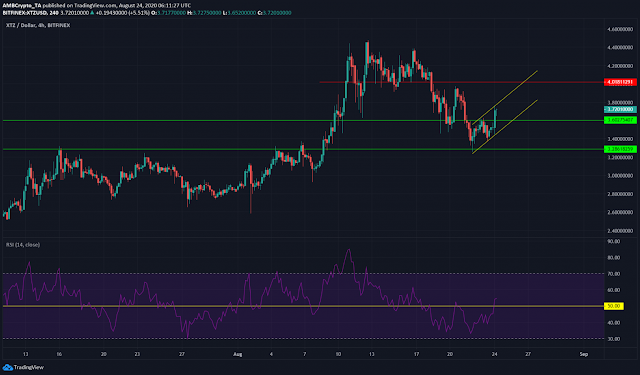 The 13th ranked cryptocurrency seemed to have embarked on an uptrend in the short-term and could result in a break-out from the downtrend of the past two weeks.

After touching $4.47, Tezos failed to register new highs. Sell pressure saw XTZ test support $3.6, and break lower to test support in the region around $3.28. From there, XTZ looked to continue in channel (yellow) as indicated.

RSI showed a value of 54. As long as RSI does not go below 50, it supports the notion of an uptrend.

It is also possible XTZ could face selling pressure which will force it below support at $3.6 and out of the channel, invalidating the idea of an uptrend.