Monero was noting a bullish divergence on the charts, with XMR trading beneath an important level of resistance, at press time. Synthetix, however, showed indecision in the markets and could see a drop in price over the next few hours. DigiByte bulls and bears were in equilibrium, but bears could force another minor pullback in the next few trading sessions.

The RSI showed a bullish figure of 57, at press time, with the same rising alongside the price as it bounced off the support in the region of $87. The price had also formed a bullish divergence, highlighted in white, registering lower lows while the momentum indicator (RSI) made higher lows. 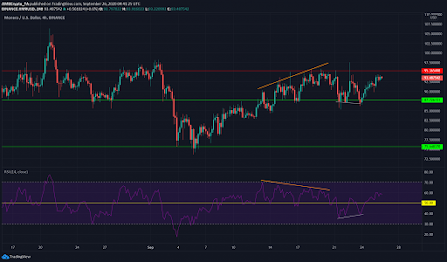 XMR has been unable to ascend past the $95-resistance over the past week and could face selling pressure in the same region once more.

Also highlighted on the chart in orange was the impending bearishness XMR showed as it neared $95 a week ago. The price had been forming higher highs while the RSI made lower highs. This played out and the price was forced to test the support at $87 twice.

In related news, it was recently announced that Monero had been added to Atomic Wallet.

The MACD registered a bullish crossover a couple of days ago and also crossed into bullish territory. This was a clear bullish signal, yet the price met sharp selling pressure at the resistance level of $5, evidenced by the long upper wick, denoting rejection at the resistance. 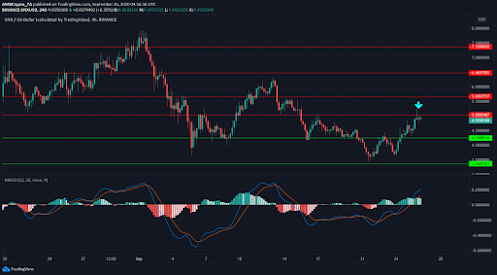 The subsequent trading sessions also suggested indecisiveness in the market, as shown by the cyan arrow. The price oscillated both ways, but neither buyers nor sellers prevailed.

This price action near an important level of resistance might indicate short-term bearishness, and SNX could be headed for a minor drop to $4.5, before it resumes its recent uptrend.


Bitfinex recently announced the listing of SNX and added that SNX deposits were open.

DGB rose strongly past multiple levels of resistance, till $0.032 proved to be particularly thorny. Sharp rejection at that level saw DGB move beneath previous support levels to trade at a press time of $0.025. 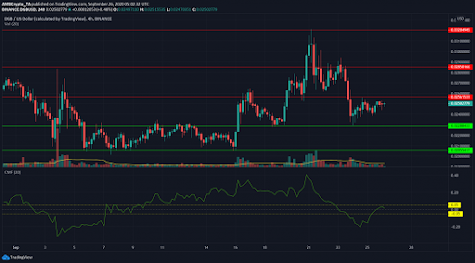 The Chaikin Money Flow showed a balance between buyers and sellers in the market with CMF near 0. The trading volume over the past few sessions has also been low, suggesting that many traders have opted to sit on the sidelines and wait for DGB to confirm its next direction.